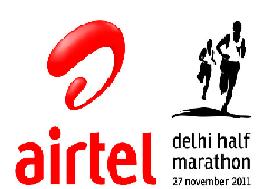 It’s that time of the year again whenDelhi’s sports lovers come together to reaffirm their commitment towards converting the city into a healthier and fitter one through the simple, but joyful task of running. Around 30,000 sports loving people and health and fitness enthusiasts are expected to come together to run shoulder to shoulder with some of the world’s leading distance runners along with India’s best when the Airtel Delhi Half Marathon will be flagged off in Delhi on November 27, 2011, under the aegis of the Athletics Federation of India (AFI). The world’s most prestigious Half Marathon race, recognised by IAAF as a “Gold Label Event” and certified by the Association of International Marathons and Road Races, returns for the seventh year, and for the fourth time in its current avatar of the Airtel Delhi Half Marathon. This year the marathon is dedicated to ‘Friends’ and invites all like minded people to come together in true spirit of camaraderie and friendship.

The registrations for the event were declared open by Sanjay Kapoor, CEO-India & South Asia, of  Bharti Airtel, in the presence of Smt. Sheila Dikshit, Hon’ble Chief Minister, Government of Delhi, Bipash Basu, the ‘Face of the Event’, high ranking officials from AFI, the various partners to the event and Anil Singh and Vivek B Singh of Procam International, the promoters of the event at a press conference at the Official Host Hotel Le Meridien in New Delhi on Tuesday, August 23.

The occasion was also used to announce the Inter-Collegiate Sporting Challenge, an exciting initiative targeted at the vast resources of athletic talent present inDelhi’s colleges, and some novel additions aimed to enhance the running experience of the serious amateur runners.

Announcing the registrations open, Sanjay Kapoor, CEO-India & South Asia, Bharti Airtel said, “Airtel’s success story is synonymous with determination, perseverance and the ability to never lose sight of the long term goal, just like a seasoned runner. We salute the spirit of forging ahead in the long race and are delighted to be associated with Airtel Delhi Half Marathon for the 4th consecutive year. Taking a leaf out of our new campaign “Har ek friend zaroori hai yaar”, we urge all of you bring alive the spirit of togetherness and camaraderie. As we come closer to ADHM 2011, I am confident that the city ofDelhi will take a lead in inspiring friends to come together and participate in large numbers.”

Prize money of USD 210,000 helps the event maintain its status as the world’s richest half marathon and is expected to attract 40 of the world’s top 100 male and female long distance athletes. The event will also witness the presence of some of the biggest names from the world of sport as Event Ambassadors.

The timing certificate will also ensure that the applicant gets preference over non-times participants in the registration process. There will also be a number of running places reserved for women applicants to encourage them to train and run in the half marathon. Applicants who are not timed will fall in the open category, for which there will be limited places that will be filled on a first-come-first-served basis.

It is evident from the number of people registering for the half marathon, that the Airtel Delhi Half Marathon has helped inculcate the culture of running and fitness among the populace ofDelhi. Last year around 8,000 people registered for the half marathon and the figure is expected to be higher this time around as 10,000 running spaces have been reserved for the Half Marathon category.

Besides the Half Marathon, which occupies pride of place, race day has been packed with features like the Great Delhi Run, the Senior Citizen’s Run and the Wheelchair Event, giving every Delhiite above the age of 12 an opportunity to emerge winners in their own right.

Inter-Collegiate Sporting Challenge: Delhi’s Universities and colleges enjoy a rich and glorious sporting tradition and have helped create many national and international sportsmen in various disciplines. The Inter-Collegiate Sporting Challenge will now give these colleges a further opportunity to earn for themselves the unique distinction of being theChampionCollege of the Delhi Half Marathon. What better platform than an IAAF Gold Label event and what better inspiration than to be running alongside some of the world’s andIndia’s leading long distance athletes.

While invitations will be sent to all the universities ofDelhi, participation will be restricted to only 30 colleges and entries will be on a first-come-first-served basis. Only one team will be allowed per college and each team should comprise three members between the age of 18 to 24. Of the three members, at least one member should be a female. Girls colleges can field an all-girls team. Each member will be required to run approximately 7 kms.

The champion college will win prize money of Rs 30,000 besides a replica of the rotating trophy, while the 1st runner-up and second runner-up teams will take home Rs 15,000 and Rs 9,000 respectively. The members of the winning teams will be presented with medals and merit certificates, while participation certificates will be awarded to the members of all the other teams.

New Timing Partner: As a part of its association with the three Gold Label distance running events promoted by Procam International, global watch major Timex will be the Timing Partner of the Airtel Delhi Half Marathon.

The association kick started with the World 10KBangaloreand will continue with the Airtel Delhi Half Marathon and Mumbai Marathon.

Timex has a history of sporting associations and has always chosen to associate with events where split- second timing and precision is of the essence. The global watch major has been the principal sponsor and the exclusive Official Timing Partner of the prestigious ING New York City Marathon and the Trusted Training Partner of the New York Giants. Over the years, Timex has always been the global sponsor for Triathlons internationally with the Times Multisport Team competing in Triathlon competitions worldwide. Ironman is a classic case of a long- term Timex association which has fuelled extreme sports and the concept of racing against time for years now.

Registration process: Registration for the Airtel Delhi Half Marathon can be done online through the event website www.procamrunning.in   or duly filled entry forms, along with the applicable fee, can be mailed to P.O. Box No. 3634, Lajpat Nagar, New Delhi -110 024.

Local Delhi & NCR residents can also deposit their application forms along with requisite entry fees at the nearest Easy Bill outlet in Delhi & NCR. To know the locations of Easy Bill outlets, please log on to www.procamrunning.inor contact our event helpline number +919650033333.