Have you seen eBay India's Offers before IPL-6 matches? 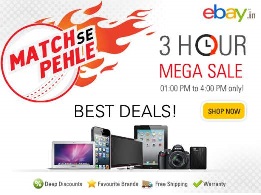 eBay India (www.ebay.in), India’s leading eCommerce marketplace, has unveiled its latest integrated campaign crafted specially for the T20 cricket season. The new campaign is designed to encourage shopping on eBay India before a match through a series of humorous TVCs created by Law & Kenneth.

eBay India’s new campaign is targeted at cricket enthusiasts in the age bracket of 18 – 40 years who are hooked to T20. The TVCs are based on quarrels between a husband & wife over viewing cricket matches and how husbands please their spouse by shopping online before the match.

Mr. Muralikrishnan B., Country Manager, eBay India says “Our new campaign has been created specifically for cricket fans to provoke shopping during the tournament, before, during or after a match. The intent is to get consumers to shop through their tablets, smartphones & laptops to highlight the convenience factor of shopping on eBay India allowing the sporting fan to enjoy his match in peace while keeping their spouse happy.”

Mr. Charles Victor, National Creative Director, Law & Kenneth added, “Rather than just work with the insight that women hate having men glued to the television during cricket season, we included the fact that men really do not know what works with women. So while it seems like nothing’s changed, in the end men realised it worked. That was the part we had to get right.”

Simultaneously, throughout the T20 season there will be a Mega Sale on         eBay India (www.ebay.in) from 1PM to 4PM offering mouthwatering ‘Match Se Pehle’ deals on popular products. The sale will feature 6 popular products at great deals and free shipping.

Scheduled for a nationwide launch, the campaign has been developed by Law & Kenneth. The campaign will roll out nationally, with a combination of TV, digital & social mediums to drive awareness and encourage Indians to look for fantastic deals with unmatched variety on eBay India while enjoying the

The campaign also reinforces eBay India’s positioning as a destination for the widest range of brand new every-day use products, with the best deals across product categories such as apparel, accessories, fashion, personal care, gadgets, technology products, fitness, health-care among many others.

Storyboard of the Ad

The campaign is a series of 4 TVCs of real life situations. In one ad, a young man is sitting comfortably at home when his wife comes up to him & asks him if he needs a shoulder massage. The amazed man has a witty smile on his face because he knows it was due to the quick shopping spree on eBay just before the match. In another ad, the husband comes home late after watching an IPL match & sees that the table is set for a romantic dinner for two with a cake that reads ‘Happy Anniversary’. The wife surprisingly exclaims happiness at the victory of her husband’s favourite team & wipes off the ‘Anniversary’ on the cake with the knife and begins cutting it; all this because her husband shopped for her on eBay before the match. The ads end with the tagline ‘Match se pehle eBay pe shopping’.