Do you think Broadband is affordable in India?

Next Gen Telecom by Telecomblogs on April 28, 2010 Cost of Broadband in India 1132 views

I often considered myself fortunate. Living in India’s national capital and always able to connect myself to Internet via broadband, either at home or on move, made things quite easy for me. But life isn’t that easy, when I step out of my ‘broadband comfort zone’ and start thinking about people in India, who don’t have easy means of access to ‘Information Highway’. And latest TRAI stats indicates this fact; in India only 8.7 million people (<1{af589cdba9d77786c8c861317dbad60bba1e2ebbf56e2ffab874a1b59fde9ce3} of total population) can taste the broadband flavor. Rests are still deprived of it!

I often wondered, why so many Indians aren’t in position to get connected via broadband? Is Broadband connection affordable in India for Indians?  The latest report released by ABI research thinks so. The report outlines the fact that India, France & UK are the countries where mobile broadband is the cheapest. In particular, Indian telcos offer mobile broadband plans as cheap as $17 per month. But then are they cheap enough to be afforded by Indians? 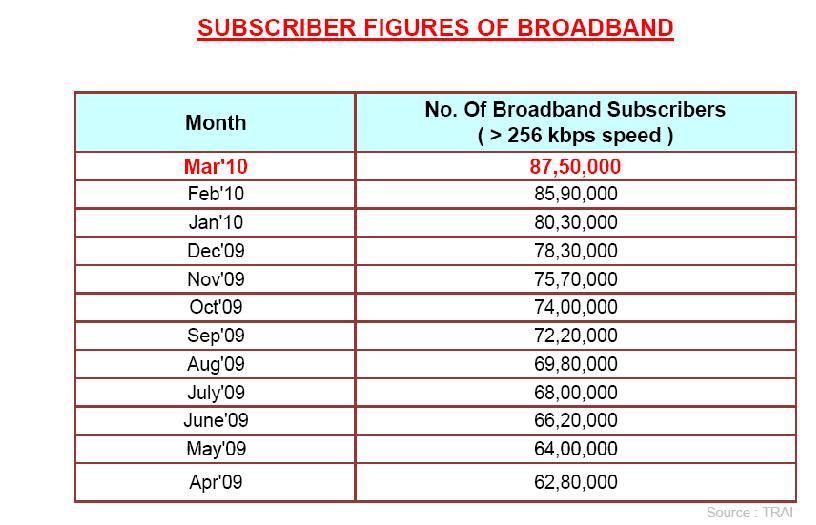 If you look at India’ Per Capita Income information, then it points to one simple fact. India is ranked at 139th position and has per capita income of $1032, which is quite low. Now, if you go with $17 logic, then you end up paying $204 per annum for broadband connection, which is 1/5th or 20{af589cdba9d77786c8c861317dbad60bba1e2ebbf56e2ffab874a1b59fde9ce3} of per capita income of an Indian. This straightaway points to simple question-will you spend such a hefty amount for broadband?

Now, if you are following our Tariff Alerts, then it will be easy to tell what’s wrong? Just check out the ‘Broadband Plans’ released by Indian telcos in month of Apr-10.  Let’s take out some Airtel Broadband Plans. If you have to buy Airtel Broadband connection, you will have to pay at least Rs 599 for 256kbps connection (excluding taxes) for unlimited broadband usage. There’re some other plans where you can avail speed upto 50Mbps, but then you will have to shell out at least Rs 8,000 ($160) for that. So broadband comes with heavy price tag or download limits or speed limits. Access is really constrained!

Same is true for MTS’s MBlaze Data care plan or Indicom’s Datacard plan; broadband starts at minimum $11 in India with either speed constraint or usage limit. Then why would you go for it? It could be still cheaper if you compare it with other nation’s tariff plans, but for native citizens, the cost is still exorbitantly high to afford.  The verdict is clear- Broadband is still not affordable for average Indian user.