Mobile Internet in India- A Report!

Next Gen Telecom by Telecomblogs on January 10, 2010 Mobile Internet in India 1336 views

The latest Internet & Mobile Association of India (IAMAI) report on Mobile Internet in India   shows that India had 57 million Internet users as on Sep-2008; the numbers are likely to grow multifold-thanks to Technology, Content & Devices convergence.  But real concerns in widespread adaptation of Internet got little attention in this well documented report.

Before we discuss the report in deep, let’s define the term ‘Mobile Internet’ first. According to the report:

Mobile Internet is the system of interconnected network which is accessed through mobile devices such as a cell phone, PDA or other portable gadgets or browsing a mobile network such as Wi-Fi.

The point is, access to Internet doesn’t require desktop or fixed landline connection. Mobile Internet is also referred as ‘Internet on Move’ in some jargons. 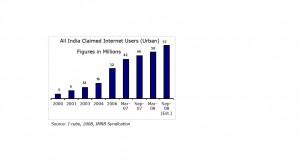 With increasing penetration of Laptops & Netbooks, we have seen devices has played greater role in growth of Internet users. But according to the report, there are two main factors who contributed towards growth as well, namely Technology & Content. Without Technologies such as Fixed & Mobile Broadband, 3G, WiMAX or contents like m-commerce and social networking, it would be wrong to attribute growth to mere devices like iPhones or Android based smartphones. Although, India has yet to see e-reader launch, in coming years, devices will hold the key of differentiation in Mobile Internet space in India.

Some other highlights of reports (Download it at Mobile Internet In India) are:

So blame it on DoT for its inability to free up necessary spectrum for NGN Mobile Broadband Technologies like 3G /BWA or on Telcos for keeping Internet access data plans costlier, there is no simple solution to drive Internet growth further. There are some other drivers for Mobile Internet usage in India which will play important role, says report. With impending 3G/BWA auction in India, we will get to see Mobile Internet usage on rise by the end of 2010, when 3G will actually get deployed across India. Some other factors like Technology R&D, collaboration with foreign players (Tata-DoCoMo etc) along with technological aspect like improvement in Speed, affordable Data/Broadband tariff plans and cheaper devices, will also have significant role to play in coming years.

If all goes well, the day is not far, when we will see Quadruple Play- Voice, Data, Video & Mobility, powering the ideas of seamless connectivity and ubiquitous information sharing in India. Certainly, as said before, Internet has major role to play in transforming India towards a knowledge society. And it has become clear in last couple of years that it’s possible to carry Internet to masses, bypassing Desktop/PC path. Mobile Internet has to rewrite the growth story yet.