As we are reaching to end of year 2009, where we are also celebrating a decade of National Telecom Policy-99, which paved ways for phenomenal telecom growth in India, Telecomblogs thought of taking a overview of India’s Broadband Growth, in a decade’s span. And while I was preparing to write, it was becoming evident that on one side when we weigh Mobile Penetration as benchmark; broadband penetration fades distant away with insignificant record of growth in last decade.

When I mentioned NTP-99, two thoughts just came to my mind. Should DoT possibly think of revising a decade old policy on telecom reforms? And if there isn’t anything on revision of NTP-99, can we have a brand new Broadband Vision -2020 policy, for next decade, based on few ideas published on SiliconIndia?  Now coming back to our present topic of discussion, latest Pyramid Research report says, India had 0{af589cdba9d77786c8c861317dbad60bba1e2ebbf56e2ffab874a1b59fde9ce3} per-population broadband subscribers in 2008 and number grew to 1{af589cdba9d77786c8c861317dbad60bba1e2ebbf56e2ffab874a1b59fde9ce3} in 2009 (which is actually &lt;1{af589cdba9d77786c8c861317dbad60bba1e2ebbf56e2ffab874a1b59fde9ce3}). While as per TRAI’s report on broadband stats, India has 7.5 million Broadband subscribers at the end of Nov-09. Though we have added approx 2.1 million subscribers (Dec08-Nov09) in span of one year, if you compare it with avg monthly rate of mobile subscriber addition ( 8 million/month), it’s insignificant. Broadband growth has become more than a blot is shining Telecom Growth story. 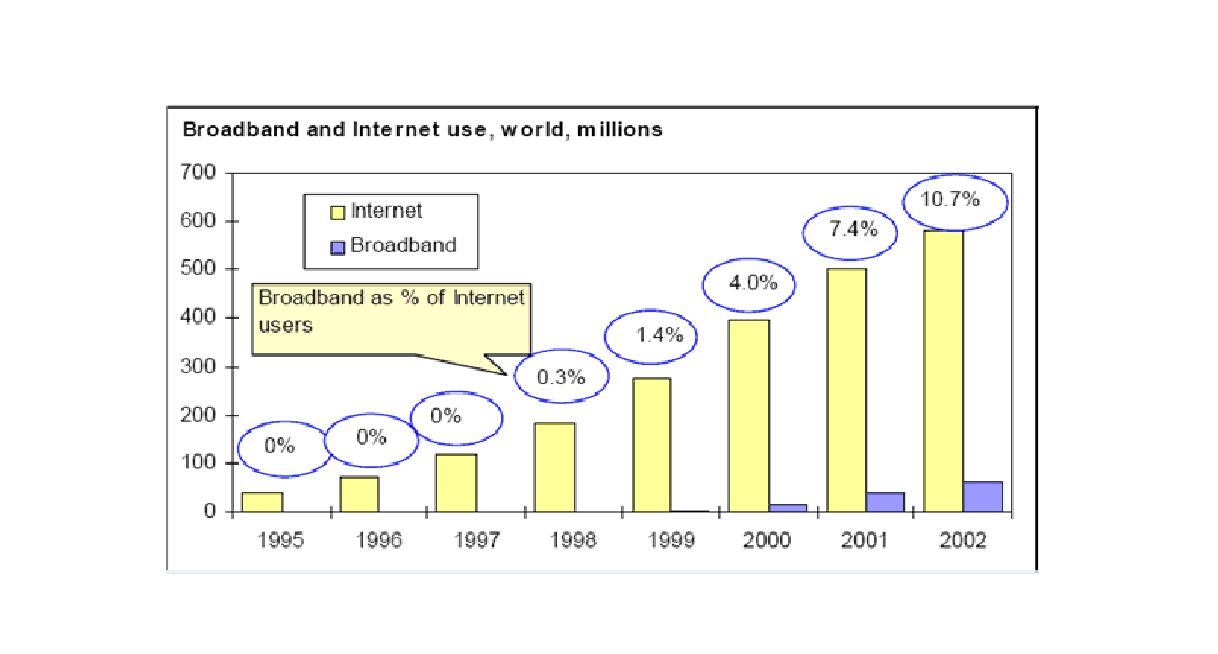 As per TRAI’s Broadband Consultation Paper (2003), which is oldest consultation paper available on ‘Broadband Growth’, despite announcement of new ISP policy in 1998, India continued to show dismal Internet usage pattern. From growth rate of 55{af589cdba9d77786c8c861317dbad60bba1e2ebbf56e2ffab874a1b59fde9ce3} in early 2000, growth was just few percent in mid 2003, in span of four years. Though, there’s no word on such negative trend of Internet usage (See Image Below), possible main causes could be one of following: 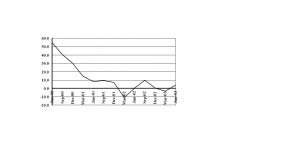 Moving ahead with TRAI’s Recommendation on Internet & Broadband (2004), India had 0.4 Internet connections and 0.02 broadband connections per 100, while Korea &amp; China stood at 25 &amp; 1.4 respectively.  While India was adding 0.28 million/month mobile subscribers in 2002 and the number grew 2 million/month, broadband adaptation hasn’t pick up to any reasonable level. But why Broadband growth is significant? Why we are stressing on Broadband?

“Broadband is particular promise is in its capacity to enable multiple applications   over a single network, and the related economic gains- meaning greater access at lower cost”

Even TRAI emphasizes this fact clearly, stating that “Internet and Broadband roll out has the ability to have further reaching effects than the reforms in telephony”. It also stresses on universally accepted phenomenon; widespread adaptation of broadband accelerates GDP growth. It further adds:

“In 2002, IT, driven primarily by broadband rollout, accounted for 50{af589cdba9d77786c8c861317dbad60bba1e2ebbf56e2ffab874a1b59fde9ce3} of South Korea’s GDP growth rate.2 An analysis by the Confederation of Indian Industry National Broadband Economy Committee shows that the total present value (2004) of benefit to  the Indian economy due to growth from broadband is expected to be US$90 billion for the years 2010 – 2020, with an 11{af589cdba9d77786c8c861317dbad60bba1e2ebbf56e2ffab874a1b59fde9ce3} additional growth in labor productivity. This activity is expected to launch new business lines and increased efficiency in existing businesses, leading to direct employment of 1.8 million and total employment of 62 million by 2020. These estimates are based on CII’s goals of achieving at least 10 million subscribers by 2010 and 32 – 39 million by 2020.”

But then why growth of Broadband is slowed down? Why it couldn’t achieve its target? According to CII, at least US $2.6 billion investment by 2010 and US $5.35 billion by 2020, will be needed to achieve the growth, which might have fallen short. This investment is needed primarily in field of urban networks, domestic and international backhaul, content delivery and rural build out process, which is itself a formidable task. There are many hurdles unattended. Despite some known issues, as mentioned earlier, there’s little work carried out.

Table here shows,  ‘Broadband Growth’ in next few years. India had &lt; 50k broadband subscribers in year 2004. In Mar-2007, the figure reached to 2.34 million, amounting to 50 times growth in broadband subscriber base within span of three years. Now, as per TRAI’s latest stats, this subscriber based reached to almost double within next one and half year to 5.4 million by end of Dec-08. And as said earlier we have 7.5 million subscriber using Broadband connections (&gt; 256kbps).

Now coming back to TRAI’s Recommendations on Broadband (2007), earlier predicted Broadband subscriber growth has already some missed targets. We have yet to achieve 9 million broadband sub base mark, which could have been achieved in 2007. Now, let’s not talk about overestimated target of achieving 20 million Broadband subscribers in next one year. Telecomblogs believe that, we are going to miss one more target once again.

Certainly there are few policy issues. Cost of a broadband connection deters prospective subscribers from buying new connections. More or less Internet usage is still limited to Metros and Tier-I cities and digital divide is growing. Though Internet access via mobile is gaining momentum, achieving broadband speed over existing 2G/2.5G/2.75G networks isn’t possible. We will have to wait till 3G/BWA spectrum auction happens to achieve mobile broadband speed on move.

Issues pertaining to Broadband aren’t something which can’t be tackles systematically. DoT and government has to play central role in encouraging Internet Infra roll-out and filling up digital divide. Highest broadband speed achieved in India until now is 16Mbps, which is significant, but there’s little awareness over power of Internet connection among people. Certainly, we are still far away from becoming a Knowledge Society and Broadband adaptation has central role to play in it.

Wish you a very Happy New Year Ahead!

Mobile Internet in India- A Report!